Is the Handkerchief More Hygienic than Tissues? 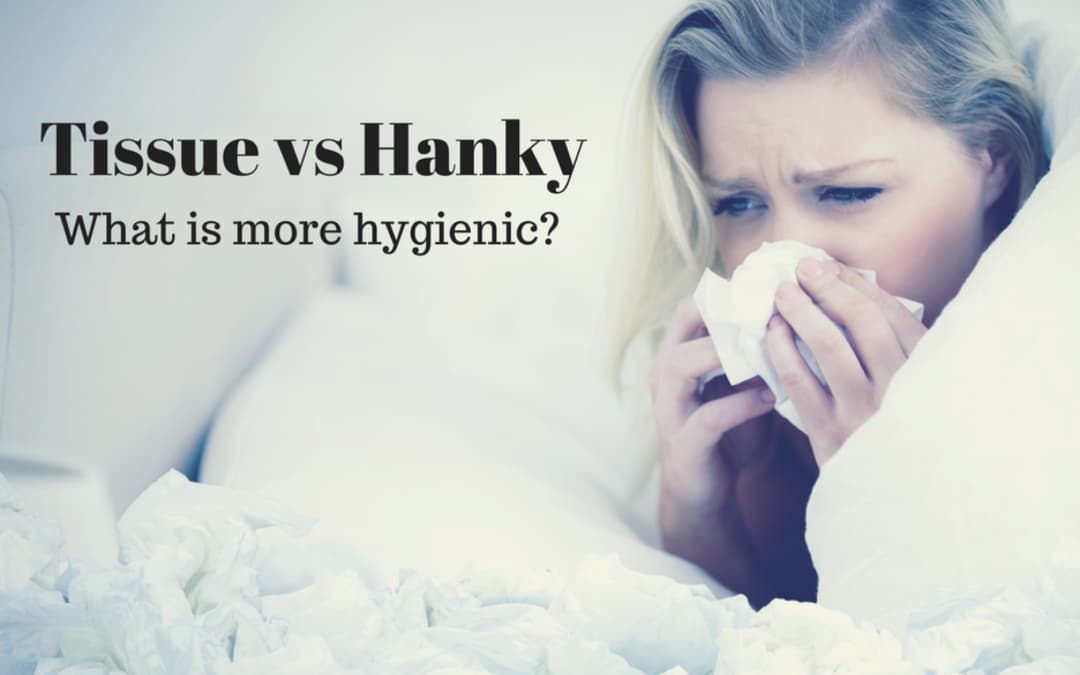 Historically, the handkerchief (“hanky”) was the charming companion for anyone that urgently needed to wrangle a sneeze or blow a nose. By the mid-20th-century, disposable tissue paper had become a popular alternative.

Sorry, ladies. Today even hanky fans have to admit that the tissue has become the sneeze saver of choice for the masses. For many, the handkerchief is simply old-fashioned.

Aside from being viewed as old-fashioned, the other big knock on the hanky is that it is unhygienic. At least when compared to a disposable tissue.

But is the tissue actually more hygienic than the handkerchief?

If you’re confused, don’t worry, we’re going to break it down. Let’s look at the most common examples when people think of hygiene.

The tissue is considered more hygienic because someone can blow their nose, contain the potentially germy parts inside the tissue and then throw it away. If they also wash their hands afterwards, then their risk of spreading germs to someone else is very remote.

Then there’s the hanky.

People imagine reusing wet areas, touching wet parts with their hands, and then tossing it into their pocket or bag where the germs can easily spread to other items.

If the debate were just those two examples pitted against each other, the winner would easily be the tissue. But is that a fair comparison?

We think not, and here’s why:

How to dispose of tissues

Getting rid of tissues immediately is a nice thought but how often does that actually happen? People are busy. And trash cans are not always available.

A more common example would be someone typing away at the keyboard; so enthralled with their work that they don’t want to get up to dispose of their tissues. So the tissue gets wadded up and put on the table.

It’s not hard to think of other real-world examples:

Someone is driving, or walking outside, or cycling, or taking an elevator. In many cases, a used tissue is going to end up in someone’s bag or pocket. Oh, and if you think hand cleaning is common in these instances, think again.

Now let’s return to the handkerchief. This time let’s imagine a hanky user that carries more than one at a time. Not only that but they fold it after use, presenting a new dry area each time. The hanky is also folded inwards before going into their pocket, so the germs remain trapped inside. When one hanky is used up, they pull out another one. And when they get home the used hankies are added to the next wash.

After that they are completely clean and hygienic once again. Just like a towel, or clothing, or underwear.

Now, if we compare those two examples instead, which use case sounds more hygienic to you?

We’ve been asking the wrong question

It becomes clear that when talking about hygiene, it’s not so much the tool as it is how we use it.

If you use tissues or a hanky properly, you’re going to be fine. Use them incorrectly, and it’s going to get a bit gross and potentially unhygienic.

So the hanky’s unhygienic reputation is definitely overstated. But that doesn’t mean there isn’t room for improvement. The hanky has had a good run, but maybe it was time for an upgrade.

The HankyBook is exactly what it sounds like. A hanky in the form of a book with a soft outer cover and individual sewn “pages” made of ultra-soft, organic cotton.

The HankyBook is more versatile and eye-catching than a normal hanky, making it handy for everything from sunglass cleaning to wiping up spilt drinks.

It’s also much friendlier on the environment, especially compared to tissues. But today we’re talking about hygiene, and that’s where the HandyBook really comes into its own.

The multiple pages increase the dry real-estate for nose-blowing while turning the page gives you a new dry surface to use. You never have to worry about touching germs because you only hold the outside cover, not the hanky pages inside.

And when the HankyBook is closed and slipped into your back pocket, the germs are completely locked in. Unable to spread to other surfaces.

Also, when blowing your nose, the thickness of the HankyBook prevents germs from spreading – something that happens quite often with a thin tissue.

The final verdict on germ control

When it comes to how to deal with your germs, the most important thing is not whether you use a hanky or tissues.  It’s all about using good, hygienic habits to minimize the spread of germs.

If you’ve never tried a hanky before, give it a chance. I bet you’ll be surprised.

Or better yet, if you really want to embrace cleanliness, try the versatile HankyBook. There is no better companion for sneezing fits and running noses.

Actually, there’s no better companion, period, as these 23 uses for the HankyBook clearly attest.

Go ahead and try out a HankyBook to see for yourself. Browse the shop and use the special code HBSHOP for 10% off your order.