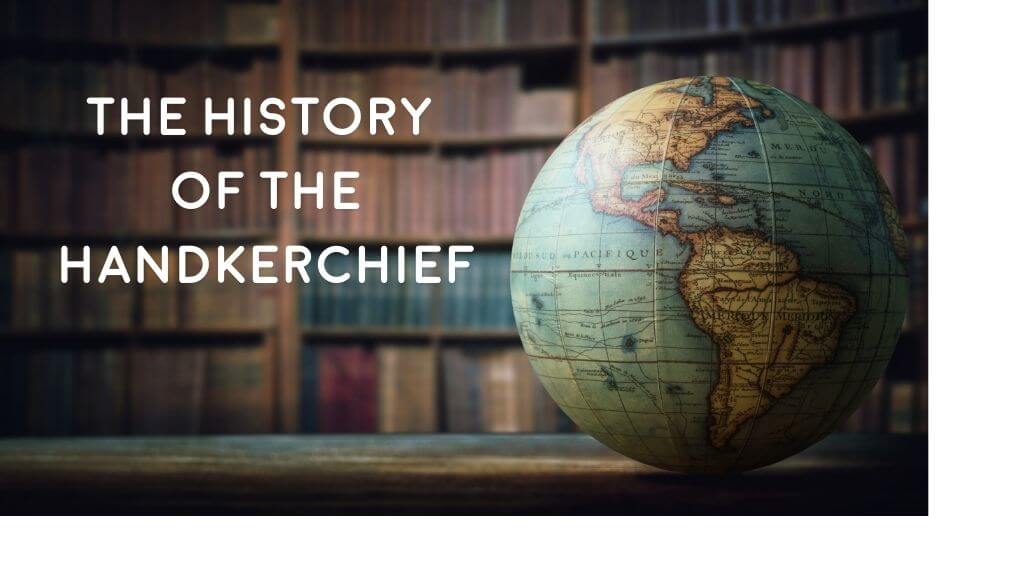 The humble handkerchief is tied into human history, culture, and literature more than you realize. The history of the hankie spans continents, traditions, and human development. From ritual, to fashion, first century to twenty first. Read on to explore the surprising ways that the handkerchief has featured from historical times, through the modern era, and how it will be with us into the future.

The story of the handkerchief originates in various places simultaneously. We’re all human, so we all sweat the same. Archaeological evidence has been found in China from 1000 BC showing figurines from the Chou dynasty holding pieces of cloth. This was thought to have been for the practical purposes of shielding their faces from the sun, or using it pretty much in the way that we use traditional handkerchiefs today – for blowing our noses, wiping our brow of sweat, or cleaning up a spill.

Even from time in memoriam, there is endless utility for a personal cloth.

Roman culture is awash with references to handkerchiefs. It would be quite a spectacle to see hundreds of Romans waving their handkerchiefs in the air at public games. Handkerchiefs were also used as the “starting gun”for chariot races.

As trade along the Silk Road boomed between the 14th and 15th centuries, goods, as well as culture, were exchanged between Europe and Asia. This included headscarves that doubled as hankies.

Handkerchiefs were also found in Middle Eastern culture, Uighur communities, Turkish culture, and among many other cultures all around the world throughout history. Their purpose ranged from preserving the sacred, bandaging wounds, signalling others, serving as a wallet for coins, or serving decorative and ritual purposes.

A symbol of devotion through history

A handkerchief was so much more than just medieval Kleenex. In fact, hankies were not used to blow one’s nose until the 15th century, when Dutch philosopher Desiderius Erasmus declared that snot on the sleeve was pretty gross.

Handkerchiefs and romance were inextricably linked together in cultures in the middle ages up until the modern era. For example, in the era before the cellphone photo, a knight would tie a lady’s handkerchief to the back of his helmet as a remembrance and token of good luck.

But that’s not all. Handkerchiefs gestures came to be a secret language of love.

When a maiden tossed her handkerchief from a window, it was a declaration of love, hopefully to be picked up by the man she intended her love for, and not a passing stranger. Should the object of her affection carefully pick it up and fold it into his pocket, it was the medieval equivalent of swiping right, and finding that it’s a match.

Or, if she was in the market, she would drop her handkerchief on the ground in one of many public parks that were frequented by eligible young gentlemen and chaperoned young women. This would mean that she is looking to meet the person she would love, and who would love her.

Instead of ghosting, or flowery break up letters, lovers just sent those handkerchiefs back to each other, symbolic of returning love.

A woman might send a homemade hankie, embroidered with patterns that carried its own bespoke meaning, to her love interest to be kept as a token. Should lovers exchange hankies with singed edges, it meant a deep, searing, passionate love.

Instead of texting each other “we on 4 2nite?”, a woman could subtly hold her handkerchief in the middle while she had the attention of her paramour. That gesture meant that she would be waiting for him for a midnight rendezvous of love that very night. A man might reply by waving his handkerchief with a flourish, universally read as meaning “yes”.

Handkerchiefs were such a powerful symbol of fidelity and romance, that Shakespeare’s play Othello turned on the incident of a handkerchief. Given to his love Desdemona as a symbol of his love, the mistaken impression that she had given away her handkerchief to another man was scandalous enough to drive him to an ill-fated rage.

A symbol of Wealth, Status and Class

Handkerchiefs became synonymous with signaling high station in life in Europe and beyond. Everyone from Persian Kings to European royalty adopted the beautifully embroidered hankies crafted from exotic fabrics to demonstrate their divinely ordained VIP status.

If you didn’t have a hankie, it wasn’t full drip (and we’re not talking about a runny nose). This meant that oversize handkerchiefs became quite the rage in 18th century Paris, until King Louis XVI, husband to cake-enthusiast Marie Antoinette, declared that “nobody is allowed to have a bigger one than me” and limited the size to a 16″x 16″square.

A pocket square is not a handkerchief, although it carries all the markers of refinement that handkerchiefs of yore communicated. Generally, in keeping with the tradition, it’s made of a lush fabric, like silk, and embroidered, embossed or printed as an accessory that distinguishes its wearer as a gentleman with a fine sense of fashion.

The 20th Century – the peak and decline of the handkerchief

Handkerchiefs were everywhere as an accessory in the early 20th century. The industrial revolution had led to more economical methods of processing materials and manufacturing products, including handkerchiefs. They had become a necessary part of life for men and women, young and old.

Hankies were no longer made from silk and lace as decorative accessories. They could be mass-produced out of cheaper textiles, like cloth or cotton. Handkerchiefs served the practical purpose of taking care of sniffles, sneezes and wipes, in addition to being fashion statements, or embellishments such as pocket squares.

But two things happened that halted the story of the hankie in the twentieth century. During the First World War, the world was struck by a global flu pandemic of 1918’s. Capitalizing on the fact that this pandemic was still very recent history in the world’s collective memory, and that people carried possibly contagious germs on their person, the Kleenex slogan “Don’t carry a cold in your pocket” was ingenious marketing for new disposable facial tissues.

With the “Roaring 20’s” of post-war economic growth, more disposable income meant that there was an appetite for innovation. These facial tissues had been around for a while as a convenient way for a woman to remove makeup at the end of the day.

Handkerchiefs continued to exist throughout the 20th century in fashion and as a practical accessory but their widespread use dramatically tailed off as disposable facial tissues came to dominate the market.

Who doesn’t love a comeback story?

In recent years, the handkerchief has seen a resurgence of interest. Partly due to an appreciation of vintage and retro fashion and partly because people are more aware of the problems of disposable, single-use tissues. I also like to think that innovations like the HankyBook, which provide a new shape and function for the handkerchief, is a big reason why the humble hanky is making a comeback.

We hope you enjoyed this history of the handkerchief. If you are interested in any other information, we have a truly epic handkerchief resource that covers just about everything you can think of.